Esparza: I Want The Day Where My Son Can Google My Name And Say ‘My Mom Was Undisputed Champ’ 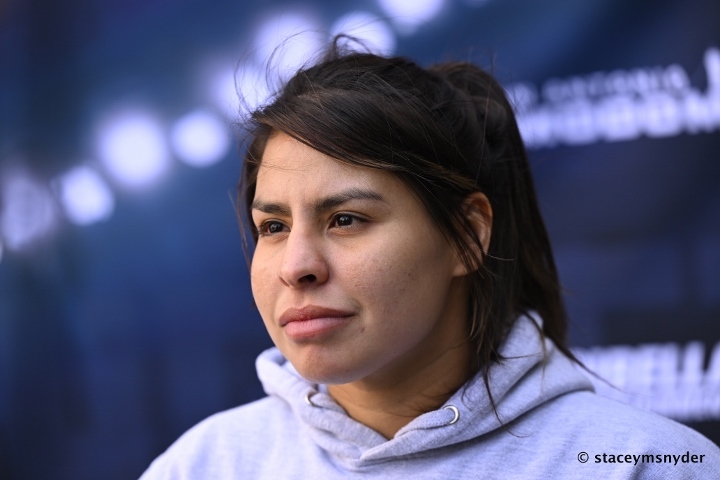 A win over Japan’s Naoka Fujioka saw Houston’s Esparza (12-1, 1KO) emerge as the unified lineal/WBA/WBC/Ring flyweight champion following a ten-round, unanimous decision win on April 9 at Alamodome. Esparza described it at the time as a moment that surpassed her representing the U.S. and winning a bronze medal in the 2012 London Olympics.

Next on her hit list is a goal she sought to accomplish from the moment she laced up her first pair of gloves—to become undisputed champion.

“Becoming undisputed is my whole life,” Esparza told BoxingScene.com. “I will die happy when that day happens. My earliest memory of boxing is when I was five, six years old. It’s all that I have dreamed of. I have the right coaches, the right people around me to get me there. I can rest peacefully when that happens.

“I want the day where my son can Google my name and say, “Yeah, my mom was the undisputed flyweight champion.”

For now, Esparza will have to satisfy an inherited WBA mandatory, which comes in a title defense versus Venezuela’s Eva Guzman (19-1-1, 11KOs). The bout takes place August 6 on DAZN from Dickies Arena in Fort Worth, Texas. It marks the fourth straight fight for Esparza in her home state, a run that began with her claiming the WBC flyweight title in a ten-round win over Ibeth Zamora last June in El Paso.

The fight with Guzman allows Esparza to remain active, returning to the ring just four months after his biggest win and fighting for the sixth time in less than two years. The hope after this fight is to land a fight with either of the division’s two remaining titlists—WBO claimant Gabriela Alaniz (13-0, 5KOs) and IBF titleholder Leonela Yudica (17-0-3, 0KOs), both of whom are from Argentina.

“Golden Boy is still working with the promoters of the other champions to make those fights happen,” noted Esparza, who has won five straight since a technical decision loss to Seniesa Estrada (22-0, 9KOs). “I don’t get too caught up in the business. They’ve always done right by me even if it’s not always at the pace I’d like at that moment, so I trust they will get it done.

“For now, I got my mandatory and I’m glad we’re getting it in now. I just became unified champion in April, now I’m fighting less than four months later. We’re trying to move fast, we’re trying to get these other fights done and I do believe it will happen sooner than later.”

Jake Donovan is a senior writer for BoxingScene.com. Twitter: @JakeNDaBox

Born on this day: Pongsaklek Wonjongkam – The Ring