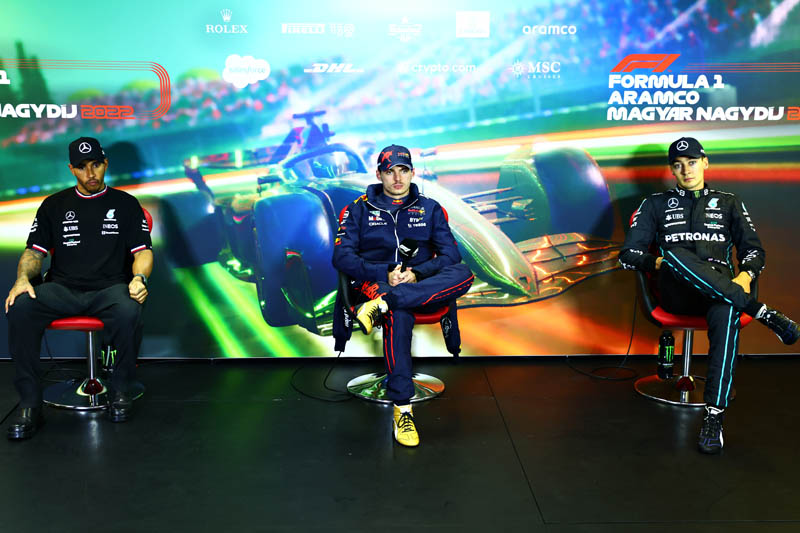 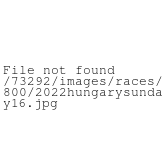 Max Verstappen, I did not expect to be interviewing you here as the winner of the Hungarian Grand Prix. Could you believe that this morning?
Max Verstappen: Not really. I was, of course, hoping that I could get close to a podium, but very tricky conditions out there. But I think we had a really good strategy. You know, we were really reactive and always pitting at the right time. I think we had some good out laps. And then at the end, even with the 360, we won the race.

Tell us about that? Coming out of the second last corner we heard you on the radio saying that you just lost the rear. The tyres shouldn’t have worn by that point.
MV: Yeah. So I was struggling a bit with the shifts and the clutch. And we had to change a few things around that to not basically burn the clutch. And that cost a bit of performance. And I think that caught me out, out of that corner. But luckily, I could do a 360, so I lost one spot.

Some good hard racing out there. A lot of respect in this championship.
MV: Yeah, it was very good, with a lot of… I was battling a lot of guys, so it was a lot of fun out there.

Down the inside, we’re just seeing behind you here with Charles, your speed with the DRS just made it your corner. He was on those Hard tyres.
MV: Yeah, he was struggling on the Hard tyre. So we had a good run out of the… (Sees replay of his own spin) Heating up the rear tyres, let’s say it like that.

Spinning and winning is acceptable but that could have been a painful experience otherwise.
MV: It was a crazy race and of course, very happy that we won it.

Well, Max, we know we’re on the summer break now. I believe the Dutch are keen on camping. Are you going to be taking a caravan for a couple of weeks?
MV: I mean, that’s what a normal Dutchy would do, right. So maybe I should get back to it.

Well, enjoy the summer break, enjoy the victory. Lewis Hamilton, what a drive. This circuit has been very kind to you, your first victory was here (sic). That’s your 11th podium. Where did the speed come from in the second half of that race?
Lewis Hamilton: I honestly don’t know. I was definitely struggling at the beginning of the race and wasn’t sure whether I’d be able to catch the guys up. But bit by bit I got a bit more comfortable with the balance. I had a really good start as well. I really want to acknowledge my team who have continued to push and never give up through this tough year that we’ve had so far. For us to be on the podium, both cars to be on the podium twice, is pretty special for us. And really unlucky for George today. You know, the other guys still have a bit of an edge but we’re clearly closing the gap. And this is just an amazing way to go into the break knowing that we have this performance. Hopefully, we’ll bring some more into the second part of the season and start fighting with the guys up front.

Is it significant that the cooler conditions for qualifying and the cooler conditions of the race came into a window for the Mercedes car?
LH: I definitely think being a little bit cooler, it seemed to work a little bit better for us. I can’t tell you exactly why, but grateful for it. I was hoping it was going to rain at the end so I could challenge Max, but we ran out of laps. With a bit of a better qualifying, if the DRS was OK yesterday, we would have been in the running for the win. But either way, two seconds in a row I’m really, really happy. So huge thank you to the fans for all the amazing support. Enjoy your summer. Bless you guys.

I can’t help but notice your suit is torn just near your elbow. Have you been in the wars in your cockpit?
LH: That’s probably just banging against the side of the cockpit. I don’t really… I’ve never seen that before. My arms are OK, so…

Good stuff. Anything you’re going to be doing specifically in the summer break?
LH: Of course. Yeah, just training, refocusing, re-centred and making sure we come back strong in the second half.

Lewis, congratulations. And finally, our pole setter from yesterday. The dream didn’t quite become a reality, George, but that’s still a solid result on the podium. For 30 laps you led that Grand Prix.
George Russell: Yeah, it was… When it started spitting at the beginning, and we were on the soft tyres, I thought we were on and we obviously made a really strong start. It was a good first stint. And then towards the end on the Mediums and the rain started to come down I really struggled and losing a bit of temperature. But again, amazing job by the team – pole position yesterday, double podium, we’re definitely making progress. So really proud of the work everybody’s done.

Yeah, there just wasn’t enough peace there in the latter stages on the tyres. Anything else you feel you could have improved on personally during that Grand Prix?
GR: Yeah, I’m sure there’s a lot I’ll look over and that I could have done better. It was challenging to manage the tyres. Obviously, we pitted quite early on both stints. So you’re trying to eke the tyre out until the end but trying to push as fast as possible at the same time. So a bit of a challenging position to be in but nevertheless pleased to come away with a podium.

The next Grand Prix is 28th of August, you’ve got a few weeks off. I suspect having had two podiums in a week you’d probably quite like a race to be again next weekend?
GR: Yeah but I think you know it’s been an incredibly intense start to the season and I think the break we’ll do everybody good. We’ll come back in the second half of the season, reset, refocus and try and fight for some victories.

A very warm welcome to the top three finishers of the 2022 FIA Formula 1 Hungarian Grand Prix. In third place, George Russell, In second place, Lewis Hamilton. And taking the 28th victory of his career and his eighth of this 2022 campaign, our winner Max Verstappen, Max what a win by you, and after the frustrations of yesterday’s qualifying, how special was today?
MV: Yeah, I think nobody really expected this. But yeah, we said to each other that we have to remain calm before the race. And I think we did that. And we made all the right calls in the race. It was a bit hectic for me in the first lap, getting a bit boxed in and staying out of trouble. But after that, we had a few overtakes and then, yeah, we pitted it at the right time. We put the right tyres on the car. I think that was the most important thing today, to have the grip. And, yeah, slowly we were just moving forward. Then, I think that final stop was very good, at the time we planned it. And then I basically saw that Charles was struggling a lot on the Hard tyre, so that was my moment to try and attack him. I got him and then I spun, did a 360, lost the position again. Yeah, it was a bit unlucky, of course. But then we just kept our heads down and got him back again, pulled a gap and basically managed that to the end, because it started to drizzle as well. And no more risk to take and just bring it home.

At what stage of the race could you feel the win coming to you?
MV: Well, after that final stop, and I saw that it was Charles there and then Checo in the middle and I could see he was really struggling for warm up and I was like, this is my chance to go for it.

You said coming into the weekend that you didn’t expect to have the fastest car here. Did the pace of the RBR team surprise you in any way?
MV: I think we were competitive. But I think also Ferrari chose the wrong tyres in their final stint before they then pitted again. Because before that I think they were quite strong as well. And yeah, it was just being on the right tyre, you know. I think also the call we had in the beginning, to be on the soft, was a bit safer, you know, to stay out of trouble and have a bit of grip. So yeah, I think it’s still, you know, it’s about little details again. And, yeah, we just keep on working, keep on trying to improve the car, because I think there are still a few more areas where we can work on to do better. But again, of course, after the break, we have a few races that are a bit different to this track as well. So it will be interesting to see how competitive we’re going to be there.

And Max, you’ve won eight of the opening 13 races, your lead over Charles is now 80 points. How confident do you feel entering the summer break?
MV: Of course, it’s a great lead. But we cannot have too many days like we had yesterday. And even today, you know, we had a few little issues with the clutch and the upshifts, which was not great to drive. Overall, of course, it’s good, but we just keep on working, keep on trying to improve things.

Check out our Sunday gallery from the Hungaroring here.

Garness puts in a showstopper in Race 1 at Silverstone

Bagnaia continues his fightback with an epic British GP win

Charles Leclerc on holiday in Gallura between La Maddalena, Porto Cervo and selfies with tourists – video