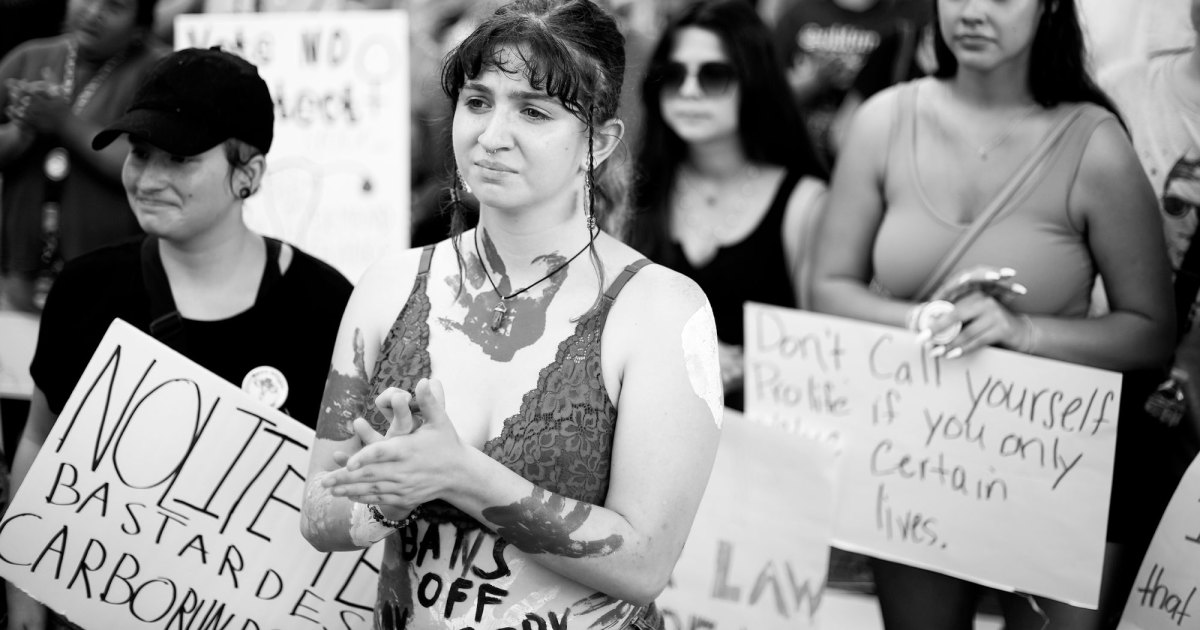 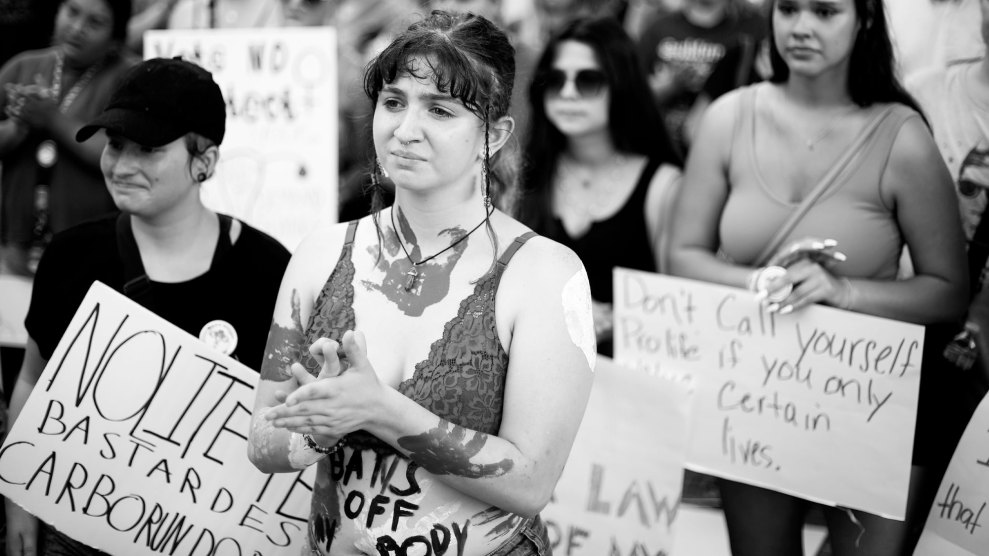 Abortion-rights advocates gather outside a the Kansas Statehouse to protest the Supreme Court’s ruling on abortion on June 24 in Topeka, Kan.Charlie Riedel/AP

Fight disinformation: Sign up for the free Mother Jones Daily newsletter and follow the news that matters.

In the first ballot test on abortion following the Supreme Court decision in June overturning Roe v. Wade, a majority of voters in Kansas on Tuesday rejected an amendment to the state’s constitution that would have eliminated the right to abortion recognized by the Kansas Supreme Court. A vote for the amendment could have paved the way for the Republican-controlled legislature to pass laws further restricting abortion, which likely would impact not only Kansans but millions of Americans from neighboring states.

In 2019, the Kansas Supreme Court ruled that the state’s Bill of Rights protected the right of personal autonomy. That right, “which includes the ability to control one’s own body, to assert bodily integrity, and to exercise self-determination,” the court determined, “allows a woman to make her own decisions regarding her body, health, family formation, and family life—decisions that can include whether to continue a pregnancy. Although not absolute, this right is fundamental.”

I’ve seen enough: in a huge victory for the pro-choice side, the Kansas constitutional amendment to remove protections of abortion rights fails.

Republican legislators put the amendment on the ballot after the state House and Senate approved the measure. A vote in favor by a simple majority of voters was then necessary to enshrine it in the Kansas Constitution.

The months and weeks leading up to the referendum have been marked by door-to-door canvassing, millions of dollars in campaign ads, and a fierce battle of messaging. Supporters of the “Value Them Both” constitutional amendment have claimed that without its passage, Kansas would become a “permanent destination for extreme abortion procedures” and that “unlimited abortion” would come to the state. The amendment, they said, would have protected “commonsense limits on the abortion industry.” Most of the funding for the pro-amendment campaign came from the Archdiocese of Kansas City, which donated $2.45 million, and the Catholic Diocese of Wichita. The national anti-abortion group Susan B. Anthony Pro-Life America invested $1.3 million to promote the amendment.

The reality is abortions are already regulated in Kansas, though not nearly to the degree they are in other deep-red states. The state prohibits procedures after 22 weeks, mandates a 24-hour waiting period and biased counseling, requires parental consent for minors, and restricts public funding of abortions. There have been no late-term abortions in Kansas since before the state Supreme Court ruling. In 2021, 90 percent of abortions performed in the state occurred prior to 12 weeks of pregnancy.

“Spokespeople on the other side are trying to make this about reasonable regulation, but that is absolutely deceptive,” Ashley All with the pro-choice Kansans for Constitutional Freedom, a coalition opposing the amendment, told me the week before Election Day. “It is about opening the door to a total ban.” Countering disinformation, she said, has been a “challenging and full-time job.”

“Spokespeople on the other side are trying to make this about reasonable regulation, but that is absolutely deceptive. It is about opening the door to a total ban.”

Fear that the Kansas legislature might try to enact a near-total ban on abortion is not unfounded. A Republican lawmaker in the state House introduced a bill this past session that would outlaw abortions and make providing one a felony. That bill included exceptions for miscarriages, stillbirths, and ectopic pregnancies, but not for rape or incest.

Those opposing the constitutional amendment said the language on the ballot was misleading and confusing. They argued that Republicans purposely put the issue on the ballot in the primary and not the November general election because primaries typically have lower turnout, particularly from unaffiliated voters who might not know they are allowed to vote on the measure. In Kansas, 44 percent of registered voters are Republicans, 26 percent are Democrats, and unaffiliated voters make up about 30 percent. Kansas’ special election on abortion rights, Orion de Nevers, an attorney at the nonprofit Campaign Legal Center, wrote in Slate, “is engineered to let Republican primary voters decide the issue while the voices of Democrats and unaffiliated voters—who make up a combined 55 percent of Kansas’ electorate—go unheard.” Republican Secretary of State Scott Schwab anticipated a surge in primary voting partially driven by the abortion amendment.

All, who has worked in politics in the state for 18 years, said it was encouraging to see people mobilizing get-out-the-vote efforts. During one weekend in Wichita, All saw an older woman with a cane canvassing in 95-degree heat; her grandmother had died from an illegal abortion. “I had never felt this kind of energy,” All told me. “A lot of people have been touched by this issue in different ways.”

Kansans for Constitutional Freedom started scaling up its campaign efforts in May and June in the wake of the Supreme Court’s leaked draft decision in Dobbs v. Jackson Women’s Health Organization, and, by July, teams of volunteers were knocking on doors in major metro areas every day, as well as smaller groups in the more rural areas. In an effort to appeal to more independent and conservative voters, the group tried to put forward the message that passing the amendment would “mandate government control over private medical decisions,” All said.

In late July, Mandy Culbertson, a volunteer in the Kansas City suburb of Overland Park, told me that she didn’t want Kansas to become “another Texas or another Oklahoma”—two states that, along with neighboring Missouri, have passed legislation effectively banning most abortions. Despite the restrictions already in place and a long history of anti-abortion demonstrations—including the 1991 Summer of Mercy protests, which effectively shut down the city of Wichita, and the assassination of third-semester abortion provider Dr. George Tiller in 2009—Kansas has become a safe haven for patients seeking an abortion in the Midwest and the South. After Texas enacted a six-week ban in 2021, Kansas providers started experiencing a bottleneck of patients.

In addition to Kansas, other states could soon hold ballot initiatives on abortion rights, including Michigan, California, Vermont, and Montana.

June visit to Mar-a-Lago included a subpoena for documents

Volokh Being Prosecuted for Anti-Government Speech

LIVE NOW: The Gateway Pundit’s Jim and Joe Hoft Interview Trump Attorney Christina Bobb Who Was at Mar-a-Lago During Raid