“Nobody expected this,” says Verstappen 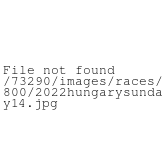 Pulling off what has to be the shock win of the season, Max Verstappen admits that he almost started the race on the infamous hard tyre.

While Ferrari was busy snatching defeat from the jaws of victory, Red Bull was giving a masterclass in just about every department, be it strategy, teamwork, pit stops and the talents of its drivers.

As a result, despite starting 10th and 11th – and even enjoying a 360 degree spin along the way – Max Verstappen extended his title lead to 80 points with a win, while teammate Sergio Perez came home a strong fifth.

“I think nobody really expected this,” said the Dutchman at race end. “We said to each other, we have to remain calm before the race and I think we did that.

“We made all the right calls in the race, it was a bit hectic for me in the first lap, getting a bit boxed in and staying out of trouble, but after that, we had a few overtakes.

“We pitted at the right time, put the right tyres on the car, I think that was most important today, to have the grip,” he grinned.

Asked about the spin, which came shortly after passing the struggling Leclerc on his hard tyres, necessitating another move on the Ferrari driver, the Dutchman laughed: “I could see that Charles was still struggling on those hard tyres, so I just tried to close up again and go for it again.

Originally however, the plan had been to start on the hards, but instead the Dutchman opted for mediums.

“It’s also credit to the team,” he continued, “because we of course plan the strategy around that, with the hard tyre, and then we were like ‘okay, we’re switching it to a soft’.

“We had a lot of confidence in just changing it around, and that’s what we did. I’m very happy that we did because the hard tyre was really, really tough.”

All of which sees the world champion head into the summer break with a seemingly unassailable 80 point lead.

“It’s of course a great lead, but we cannot have too many days like we had yesterday,” he said, referencing to the power unit issues that compromised his qualifying efforts leaving him tenth on the grid.

“And even today, we had a few little issues with the clutch and the upshifts,” he admitted, “which was not great to drive. Overall, of course it’s good, but we just keep working, keep on trying to improve things.”