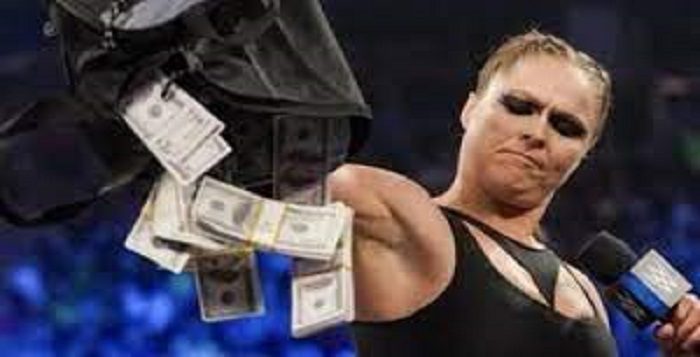 
It couldn’t hurt. WWE is the largest and most powerful wrestling company in the world, which gives them a number of resources that no other promotion can match. This includes all kinds of money, though it is not a limitless flow. As much money as WWE has, they have to draw the line somewhere, which was done via a series of budget cuts. Now though, a WWE star is taking a shot at the company for their actions.

Last week on SmackDown, Ronda Rousey returned and poured out a bag of money on a table, saying that it was payment for her fine and for the next time she would be fined. Following SmackDown, Rousey posted a series of images of herself pouring out the money and said “Use that cash wisely @wwe – Maybe it can help with those “budget cuts”. Bring back some asses for me to kick.” Rousey was returning from a suspension after attacking referees at Summerslam.

Opinion: If there is one thing Rousey is great at doing, it is taking shots at someone and burning them quite well. WWE did not exactly look great when they were raking in one huge deal after another and then cut over 100 wrestlers with budget cuts being cited. I’m sure the company could have needed to cut their budget, but at the same time, it wasn’t something that was going to be well received no matter how they presented it.

What did you think of Rousey’s comments? Which released WWE stars would you like to see come back? Let us know in the comments below.