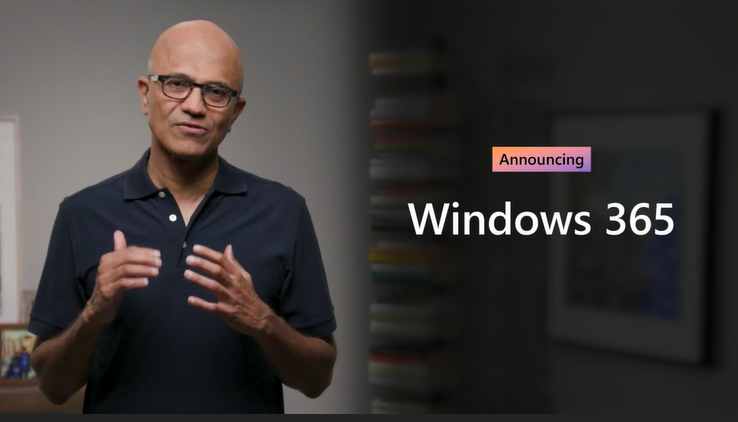 
Profits fell more than 5% in the Microsoft division that includes the company’s Windows business, the first decline in nearly three years, as the PC sales surge brought on by the pandemic ground to a halt.

Speaking Tuesday on the company’s earnings call, Microsoft CEO Satya Nadella expressed optimism in the future of Windows. Nadella said PC shipments are higher than before the pandemic, and cited increased monthly usage of Windows 11 applications. The company is also boosting its share of the PC market, he said.

However, the end of the PC’s pandemic renaissance further illustrates why it was so critical for Microsoft to expand aggressively into cloud infrastructure and subscription-based online services starting more than a decade ago — and why Windows is now following the same playbook with Windows 365 and Cloud PCs.

Companywide, Microsoft reported a 12% increase in revenue for the quarter, to $51.9 billion, and a 2% increase in profits, to $16.7 billion, overcoming the Windows slump with continued growth in its cloud businesses.

Those results were short of Wall Street’s expectations, but Microsoft shares climbed nearly 5% in trading Wednesday morning as investors reacted optimistically to the company’s guidance for the upcoming year.

In its More Personal Computing division, which includes Windows, Microsoft reported $4.6 billion in operating income for the fourth quarter of its 2022 fiscal year, ended June 30 — down 5.2% from the $4.9 billion reported in the same quarter a year ago. That compares to double-digit increases in profits in the division throughout the 2021 fiscal year.

PC shipments soared at the height of the COVID-19 lockdowns, as people working, studying and entertaining themselves at home bought newer and more capable machines for their desktops and kitchen tables.

However, in the most recent quarter, shipments declined by more than 15%, according to IDC, due to ongoing supply chain issues and COVID-19 lockdowns in China, combined with growing economic uncertainty around the world.

For the June quarter, revenue in Microsoft’s More Personal Computing division grew 2% to $14.4 billion, which was its slowest growth rate in nearly three years. Windows revenue grew 1% to $4.5 billion for the quarter, compared to double-digit percentage growth in the prior three quarters of the fiscal year.

That slower growth combined with higher expenses to create the decline in divisional profits. Microsoft said expenses in the division increased $262 million, or 8%, due to investments in its Windows and adverting businesses.

In a list of recent events impacting its business, Microsoft said “Extended production shutdowns in China that continued through May and a deteriorating PC market in June contributed to a negative impact on Windows OEM revenue of over $(300) million,” referring to versions of Windows pre-installed on new PCs.

More Personal Computing also includes Microsoft’s gaming and advertising businesses. Slower growth in the online ad market was among the factors impacting the top-line numbers in the division.

In one bright spot in the divisional results, revenue in Microsoft’s Surface hardware business increased 10% to nearly $1.5 billion, driven by commercial sales, the company said. However, low-margin hardware products have a significantly smaller impact on profits than sales of software and cloud services do.

Modern Warfare 2 Multiplayer Reveal Happening at Call of Duty: Next

An examination of data collected by Tesla: what information its vehicles record, how Tesla uses this data to develop Autopilot, and who actually owns the data (Mark Harris/IEEE Spectrum)