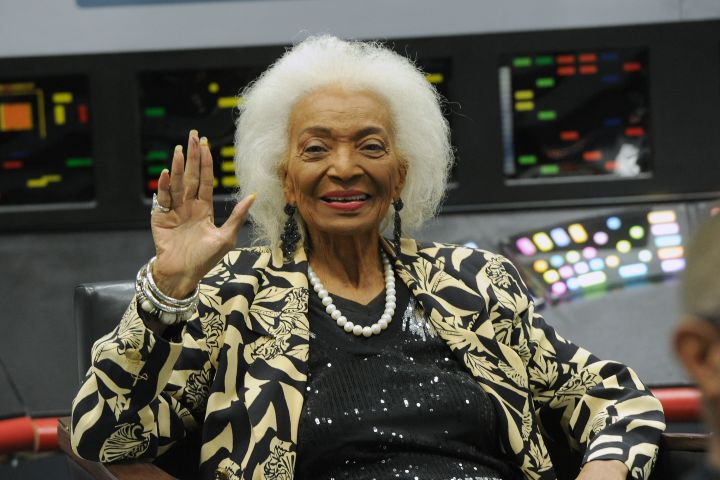 The “Star Trek” community is in mourning.

Actress Nichelle Nichols, best known for playing Lieutenant Uhura in “Star Trek: The Original Series”, has passed away at age 89.

The sad news was confirmed to Variety by Nichols’ talent manager and business partner of 15 years, Gilbert Bell, sharing that Nichols died on Saturday night in Silver City, New Mexico.

In her role as the highly capable communications officer on the show, Nichols and her character inspired generations of TV viewers.

Following the first season of the show, Nichols considered leave for a career on Broadway, but was persuaded by Rev. Martin Luther King Jr. to stay on because of the important of her character in opening doors for other African Americans on television.

Whoopi Goldberg, who played Guinan on “Star Trek: The Next Generation” has cited Uhura as a role model, sharing her amazement at seeing a Black woman on TV who was not playing a maid.

In ‘Star Trek”, Nichols also shared the first ever interracial kiss on television, with co-star William Shatner, in the 1968 episode “Plato’s Stepchildren”.

I shall have more to say about the trailblazing, incomparable Nichelle Nichols, who shared the bridge with us as Lt. Uhura of the USS Enterprise, and who passed today at age 89. For today, my heart is heavy, my eyes shining like the stars you now rest among, my dearest friend.

One of my most treasured photos – Godspeed to Nichelle Nichols, champion, warrior and tremendous actor. Her kindness and bravery lit the path for many. May she forever dwell among the stars. #RIPNichelle #Uhura pic.twitter.com/nFXHif8HEC

Nichelle Nichols left behind such a beautiful legacy of what it really means to use the platform you have to make the world a better place. I think of her example often and I hope others will too. Rest well, Lt.

Before Scotty beamed up , Before Spock threw Vulcan signs, Before Kirk told Sulu take it to Warp Factor 9 .. Sis Uhura.. Nichelle Nichols was gonna have that hair tight , skirt right and earrings dangling BEFORE she was dealing with outer space.. 🙏🏿 pic.twitter.com/bWPR3LJwTQ

Before we understood how much #RepresentationMatters #NichelleNichols modeled it for us. With her very presence & her grace she shone a light on who we as people of color are & inspired us to reach for our potential. Rest well glittering diamond in the sky https://t.co/DmeLFbg825

Excellence in representation matters even more.

To lose both Nichelle Nichols & Bill Russell is a LOT.
They both made America a better country than before they arrived, despite the fact it keeps slipping https://t.co/BzqVutwmoi

Many actors become stars, but few stars can move a nation. Nichelle Nichols showed us the extraordinary power of Black women and paved the way for a better future for all women in media. Thank you, Nichelle. We will miss you. pic.twitter.com/KhUf4YM6pX

In 1991, she became the first African American woman to have her handprints in front of the Chinese Theatre in Los Angeles.

Born in 1932, Nichols started her career at just 16-years-old, singing with Duke Ellington, eventually going on to act onstage in productions of Carmen Jones and Porgy and Bess among others.

After “Star Trek” ended, she appeared in films like “Truck Turner” and “The Supernaturals”, as well as lending her voice to animated series like “Gargoyles and “Spider-Man”. She also appeared in a number of “Star Trek” films.