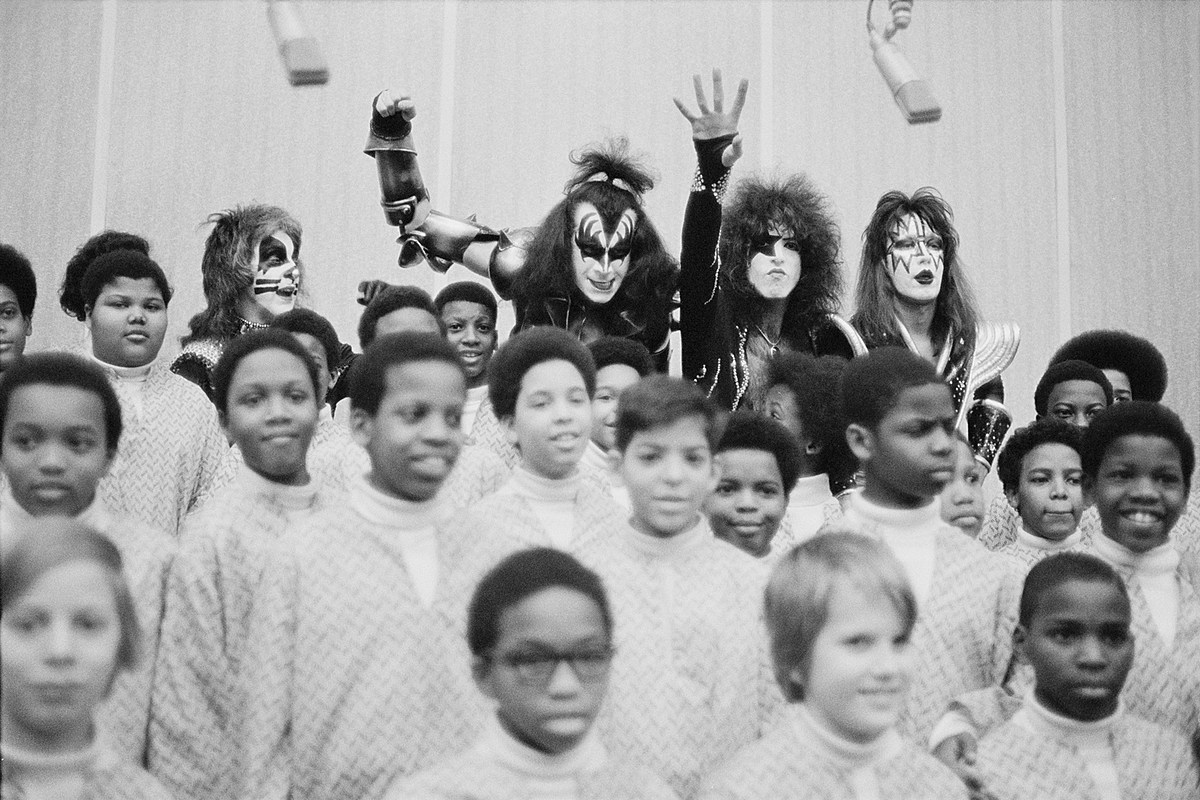 
It seems redundant to say this about grown men who got famous by dressing up like cats, demons and spacemen, but Kiss has made some pretty weird songs.

To be clear, weird doesn’t always mean bad. However, the famously face-painted band’s never-ending quest for world domination has led them to wander far from their musical comfort zone on multiple occasions, with occasionally inconsistent and sometimes downright strange results. Here’s a chronological look at the 10 weirdest Kiss songs.

In 1972, Gene Simmons and Paul Stanley were the leaders of a struggling New York City band named Wicked Lester. After the five-man group’s eclectic self-titled debut album was rejected by their label, Simmons and Stanley ditched their bandmates, recruited Ace Frehley and Peter Criss and formed the much more streamlined Kiss. Years later, they bought the unreleased Wicked Lester album back from CBS to keep the label from capitalizing on their newfound success – and to keep the album art from revealing their uncovered faces.

Several of the Wicked Lester tracks were finally legally released in 2001 as part of a career-spanning Kiss box set. The 1972 version of “She” – a song which would appear on 1975’s Dressed to Kill – sounds like a lost Jethro Tull track, filled with flute, congas and keyboards. Stanley later admitted they were chasing trends: “If wah-wahs were big, we put it on the album. If ukuleles were big, we had a ukulele track,” he said in 2001’s Kiss: Behind the Mask. “You name it, we had it on that record. It was mostly terrible.”

Here’s a good rule of thumb: If the Melvins cover your song, odds are it’s one of the weirdest tracks in your catalog. That certainly the case with “Goin’ Blind,” a sludgy ballad which casts Simmons as a 93-year-old breaking up with a teenage girl as gently as possible. The Melvins released their version on 1993’s Houdini, an album which lists Kurt Cobain as co-producer. “If I listen to the Hotter Than Hell record now, I think it’s a lot better than a lot of stuff people are trying to do along those lines,” Melvins frontman King Buzzo told Revolver in 2008. “It’s inventive and strange. It’s good brontosaurus rock, you know?”

In a truly bizarre blend of high and low culture, Kiss borrowed heavily from Beethoven’s Sonata Pathetique for the Destroyer song “Great Expectations.” (Billy Joel did the same for 1983’s “This Night.”) They hired an orchestra and the Brooklyn Boys Chorus to further class up the track, but then paired it with some of the most crass lyrics Simmons ever came up with: “You watch me singing this song / You see what my mouth can do / And you wish you were the one I was doin’ it to.” “The orchestra was dressed in tuxedo T-shirts and the Brooklyn Boys Choir was in traditional African dashikis,” producer Bob Ezrin recalled of the recording sessions in Kiss: Behind the Mask. “Imagine that picture and then superimpose it on the misogynistic lyrics, macho vocal performance and the mock-classical arrangement of the song. … I laugh every time I hear it. It was audacity elevated to an art form.”

It’s undeniably odd to hear Kiss’ blood-spitting, fire-breathing Demon earnestly croon this Pinocchio classic, but the song holds two deep meanings for Simmons. Watching Disney cartoons helped him acclimate to America after moving from Israel as a young child, and the song’s message inspired him to pursue his musical dreams. “When I first heard that song I could barely speak English,” he told Grooves in 1978. “But I knew the words were true. Anybody can have what they want, the world and life can give its rewards to anyone.” Producer Sean Delaney says the emotions of the song got to Simmons during the recording sessions: “If you listen to Gene’s version, you’ll hear his voice crack, because at that point he was crying,” Delaney said in Kiss: Behind the Mask. “I wouldn’t let him re-record the vocal.”

There’s no denying that Music From ‘The Elder‘ is Kiss’ weirdest album. After falling out of favor with their once-fervent fanbase with a pair of albums that flirted heavily with disco and pop, the band set out to record a back-to-basics hard-rock album. But producer Bob Erzin, fresh off the success of Pink Floyd‘s The Wall, helped convince Kiss to record a bizarre medieval times-set concept album. It bombed in historic fashion, and anybody involved in The Elder‘s creation will happily tell you what a big mistake it all was.

The secret truth, however, is that about 80% of The Elder‘s weirdness can be found in its first three proper songs. (The album opens with a fanfare, of course.) Except for some occasional lyrical gobbledygook, second-side tracks such as “The Oath,” “Mr. Blackwell” and “I” offer solid rock thrills. The soft-rock ballad “A World Without Heroes” fully deserved its minor-hit status, and would make sense lyrically even apart from the rest of the album.

But oh boy, those first three songs. Opening with pretentious acoustic guitar strums, chiming percussion and an unflattering Paul Stanley falsetto, “Just a Boy” aims for grandeur but elicits only mockery. “Odyssey” finds Stanley going even further off the vocal deep end Broadway style, atop overly bombastic strings, pianos and woodwinds. Simmons takes over for “Only You,” sounding like a bull let loose in a progressive-rock china shop. It’s by far the best and most conventional song of the trio – and it still pegs the weird-o-meter.

Unfortunately there’s nothing particularly weird or unfamiliar about Kiss chasing trends too far. It’s a pattern they followed in the late ’70s with disco and pop, in the ’90s with grunge and on 1987’s keyboard-drenched Crazy Nights, with hair metal. After bringing themselves back from the brink of extinction with four solid early ’80s albums and finally finding a perfect long-term replacement for Frehley with Bruce Kulick on 1985’s Asylum, the group brazenly chased after Bon Jovi-sized fame with an overly polished and poppy collection of would-be anthems. The screechy pep talk “My Way” is a clear low point. If you think that’s still not enough to earn a spot on our weirdest Kiss songs list, imagine playing this song for a fan waiting in line for 1977’s Love Gun tour – then telling them this is what their favorite band is going to sound like in a decade.

This was a Kiss original lineup reunion album in name only, with Criss and Frehley secretly replaced by session musicians on all but a couple of tracks. The weirdest song by far is “You Wanted the Best,” which features a title taken from the band’s nightly onstage introduction. The lyrics quickly reveal themselves as a straight-up group-therapy session, with all four band members trading insults and complaints in the verses, only to explain that they got together to respect their fans’ wishes in the chorus. It’s a shame they never made a video for this one, with everybody in full costume and makeup at a psychologist’s office beating the crap out of each other with foam bats. On the plus side, the music is actually pretty excellent, with Frehley in particular reconnecting with his old magic on the guitar solo.

The band’s first-ever collaborative recording teamed up Kiss with the popular Japanese pop group Momorio Clover Z. “Yume no Ukiyo ni Saitemina,” which translates as “Try to Bloom in a Dream About the Floating World,” finds Simmons, Stanley, Eric Singer and Tommy Thayer providing backing music and vocals for the five-woman group’s hyperactive pop. The live action and animation-blending video is a must-see, with Kiss portrayed as benevolent gods gifting their new friends with spiffy samurai armor. The groups switched roles for a Kiss-fronted version of the song entitled “Samurai Son,” but “Yume no Ukiyo ni Saitemina” is clearly the most gloriously weird of the two.

The Albums That Almost Killed Their Careers

Even the biggest bands and solo stars can find themselves suddenly out of favor and plummeting down the charts.

Which Rock Star Would Ace Frehley Raise From the Dead?