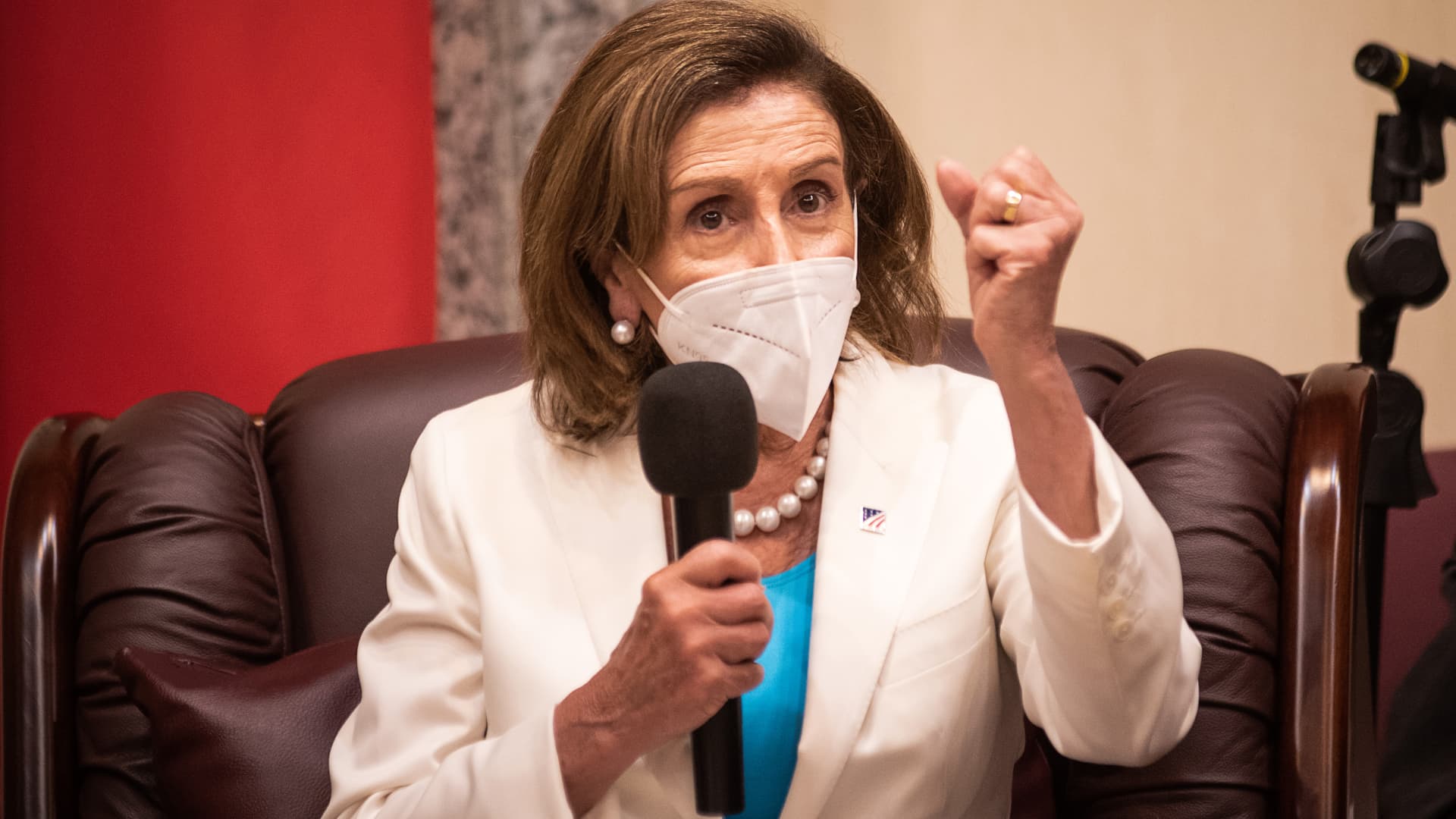 In a meeting in Taipei, Tsai thanked Pelosi for her support of democratic values and said she was committed to working with the U.S. over security in the Taiwan straits and the wider Indo-Pacific region.

Pelosi’s visit to Taiwan makes her the highest-ranking U.S. official to visit Taiwan in 25 years, drawing the ire of China which has called the move a breach of the one-China policy and an interference in China’s internal affairs.

China has warned for weeks that Pelosi should not visit the disputed island, which Beijing considers to be part of its territory.

“Speaker Pelosi is truly one of Taiwan’s most devoted friends,” Tsai said at ceremony to confer Pelosi with a medal, the “Order of Propitious Clouds with special Grand Cordon.”

“We are truly grateful to you for making this visit to Taiwan to showcase the U.S. Congress’s staunch support for Taiwan.”

Speaker of the U.S. House Of Representatives Nancy Pelosi, attending a meeting at the Legislative Yuan, Taiwan’s house of parliament on August 3, 2022. Photo by via Getty Images)

On her part, Pelosi said she was dedicated to supporting global peace and further economic collaboration with Taiwan.

“The story of Taiwan is an inspiration to freedom loving people in the U.S. and around the world,” Pelosi said.

“Out of the crucible of challenge you have forged a flourishing democracy, one of the freest in the world proudly led by a woman president.”

The medal is normally awarded to Taiwanese citizens for services to society but may also be awarded to “foreigners to promote diplomatic relationship,” according to Taiwanese law.

In her remarks on receiving the order, Pelosi expressed her gratitude for the “beautiful award” conferred on her.

She landed in Taiwan on Tuesday night after leaving Malaysia, and was expected to leave on Wednesday evening.

In the lead-up to the visit, the Chinese military held live-firing exercises all day Saturday, just 80 miles from Taiwan.

Beijing has also moved to ban imports of various goods from Taiwan including Taiwanese sweets and biscuits.

It has also suspended imports of grapefruit, lemon, orange and some other citrus fruits, frozen horse mackerel from Taiwan and exports of natural sand from Wednesday.

Ahead of Pelosi’s visit, Hua Chunying, China’s assistant minister of foreign affairs, said in a string of tweets Tuesday that Pelosi’s visit to Taiwan was a “major political provocation.”

“Since Speaker Pelosi is the incumbent leader of the U.S. Congress, her visit to and activities in Taiwan, in whatever form and for whatever reason, is a major political provocation to upgrade U.S. official exchanges with Taiwan,” Hua said in her tweets.

While China’s military response to Pelosi’s visit has raised near-term odds of a major Taiwan Strait security crisis from 25% to 30%, the chance of a major conflict remained low, said Neil Thomas, political analyst at the Eurasia Group in a note before the visit.

Eurasia Group expects Beijing’s reaction to be “unprecedented but not unhinged,” the note on Tuesday said.

“However, these PLA exercises are more performative signals than preparations for war; crisis is not yet basecase and the chance of kinetic conflict remains very low,” he said, referring to China’s military, the People’s Liberation Army.

On Tuesday, during the Chinese ministry of foreign affairs daily press conference, Hua added that China would be closely following Pelosi’s itinerary.

“And if the US continues down the wrong path, we will take strong and resolute measures to protect our sovereignty and security interests,” Hua said.

Officially, the Biden administration was careful in recent weeks to avoid directly saying whether the president agreed with Pelosi’s decision to visit Taiwan. But unofficially, the White House and the Pentagon made little secret of their opposition to it.

Biden’s approach to China is one that seeks to maintain a stable, predictable relationship with the U.S.’s biggest trading partner, while also acknowledging that Washington and Beijing are strategic adversaries.